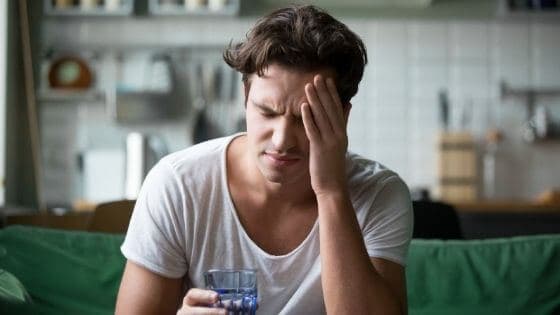 You woke up with a bitter taste in your mouth, and a horrible thirst. Your head feel like it’s exploding. There is no room for joy, no room for laughter. It feels like the dark dawn of the next morning. The poet who wrote these lines knew what he was talking about. So, how can the hangover and vomiting be avoided or relieved?

After a thorough investigation, here’s what I know:

According to studies, several treatments can reduce hangover symptoms, one being probiotics which reduce intestinal permeability and inflammation. Other useful remedies are Ibuprofen and Tolfenamic Acid, which inhibits the synthesis of prostaglandins.

What is a hangover?

Indeed, the hangover is a “dark dawn”—a series of cells are trying to recover their normal functions after being knocked out by the flood of alcohol.

Why do we get a hangover? I’m going to explain it to you straight and simple:

When consumed in enormous quantities, alcohol is a literal poison to our body; it damages cells and can even kill them. Obviously, the word “toxic” is the root of intoxication. The hangover is the first effect of alcohol overindulgence once the intoxication dissipates.

Sometimes we just feel like looking for a hole and crawling into it. In the worst cases, hangovers make us feel very sick for 24 hours and leave us feeling generally uneasy for two or three days.

When do you get a hangover, and how long after drinking?

A scientific study showed that a hangover begins 13 hours after consuming alcohol, as an inflammatory response to cytokines’ concentration. A hangover can last up to 24 hours after the onset of symptoms, with the duration depending on a person’s alcohol tolerance.

When should you go to the hospital for a hangover?

During a hangover, one should pay attention to signs that indicate severe alcohol intoxication, which can be fatal. The most urgent signs of this are: convulsions, low body temperature, and irregular or slow breathing. Before this intoxication gets too serious, it is necessary to seek medical attention immediately.

How much do you drink to get a hangover?

Each person’s biochemical makeup are very different, and so are their reactions to alcohol. Some individuals react even to tiny amounts. Medical experts consider any quantity above 60 ml per day of 90% alcohol—or its equivalent in wine or beer—as an amount that can cause a hangover.

Some people have also been found to be susceptible to certain substances found in alcoholic beverages, such as malt, starch, wheat, corn, or chemical additives and preservatives.

It is similar to the “Chinese restaurant syndrome” produced by monosodium glutamate (MSG), which in large amounts can cause headaches, muscle weakness and a sort of hangover feeling, even if you have not drunk alcohol.

People who feel sick after ingesting relatively small amounts of alcohol, yet have a strong reaction the next day, may be allergic to some of the ingredients in the drink.

What is happening in your body when you have a hangover?

If we could see inside our bodies after drinking, we would see the following:

As it is commonly said, what may help most is “biting the dog that bit us.” In other words, drinking small amounts of alcohol at intervals, along with plenty of healthy fluids to counteract dehydration. This helps the hangover symptoms disappear more quickly. And it’s not just a theory, it’s a proven fact. But, at the same time, this puts us a vicious circle. At the end of the day, increasing the intake of alcohol does not benefit the body in the long run.

How do I stop feeling sick from a hangover?

Will drinking make my hangover go away? We all ask ourselves this question. But, is there another way to eliminate the hangover?

Ibuprofen is sometimes used for hangovers, because it soothes the headache without irritating the gastrointestinal tissues like aspirin does. Another prevalent remedy is Alka-Seltzer, because it calms the pain while stimulating the body to recover its fluids.

How do you stop a hangover?

The first thing we have to do when we have a hangover is getting hydrated. The best way to hydrate is to drink water. If we get home after a typical nighttime party, try to drink as much water as you can before going to bed. Just by doing this, you will minimize the headache you are going to have the next day.

Water is also replaceable by isotonic drinks that replace all the mineral salts lost in your urine.

We can also drink milk because it contains cysteine. Cysteine is an amino acid that helps counteract all the acetaldehyde produced by the processing of alcohol in our liver.

Finally, we can drink natural juices. One in particular which works quite well is tomato juice. Why? Because it contains B vitamins that are essential to help us better overcome a hangover.

What foods help recover from a hangover? Ideally, if your stomach can tolerate it, you should eat something after drinking alcohol. Something that works is eating fruit, or eggs. Why eggs? Because eggs also contain cysteine, and this will help eliminate all the acetaldehyde produced in the liver. Our liver is working harder than usual trying to get rid of all the extra alcohol in our system.

The alcohol produces excessive insulin secretion, which lowers the blood sugar level. By eating a small meal, the blood sugar level increases and the body receives necessary nourishment without taxing the weak gastrointestinal tract. I recommend you not to eat a typical meal until your digestive system has fully recovered.

If you take paracetamol for the headache, it will mean even more work for the liver, because it now has to process that chemical too. Instead, we recommend taking Ibuprofen.

If you feel stomach pain or gastritis after massive alcohol intake, use a gastric protector such as Omeprazole or Almagate. These will alleviate these gastric effects of intoxication, and allow the ingestion of foods and liquids necessary to eliminate the hangover.

Vitamin C protects the body against the damage that alcohol does to the cells.

Take a Vitamin B complex twice a day

The alcohol prevents the absorption and proper use of this vital vitamin group, which is fundamental for the nervous system’s flawless operation.

With this advice, you will feel better and you will begin to repair the damage you have caused to the body. There is nothing more important than this.

Some people consume a mixture of tomato juice, an egg, pepper, and tabasco sauce.

This mixture has many benefits: the juice helps to recover liquids and contains Vitamin C. The egg is also very nutritious. However, if you have gastritis, the pepper and tabasco sauce will only fan the flames.

You may be interested in “How can I look younger than my age naturally?”

The ideal thing to do, of course, is to avoid a hangover. However, if you drink, try to do it carefully. Eat proteins and carbohydrates before drinking.

Food helps reduce the rate of alcohol absorption and helps you tolerate it better.

link to The Battle Over the Thermostat: Why Women Need Extra Warmth

It's a battle that has gone on for years: who controls the thermostat in your home, men or women? Whether it's an office or a house, the ongoing fight over the heat is all too common. However, if...

What do you do when your relationship is over? Do you stay in it, or do you break up with the person who's been there for you through thick and thin? This article will discuss some of the most common...

Hi! I'm John Frasier. I have a Psychology degree from California University, I am also a Nutritionist and Personal Coach with over 2 decades of experience, and I love being a man. These days, when I'm not spending time with my wife & son, I can usually be found practicing Fitness, consulting for others in the industry, and also blogging on my other blogs.